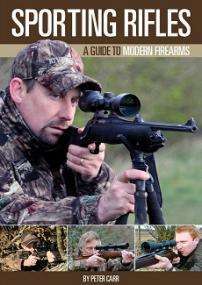 This newly–compiled and modernised book comprises a collection of modern sporting rifles available to the rifleman, from rimfires right through to big game calibres. From the traditional to the very recent, every type of rifle and major manufacturer is covered, with historical information, technical specifications and opinions from some of the world’s most respected rifle reviewers. This is a comprehensive book, lavishly illustrated with full colour photographs, and is as close to the definitive guide of rifles as you are ever going to get.

Arranged, compiled and co-authored by Peter Carr with contributions from Byron Pace, Tim Pilbeam and Mike Powell. Peter Carr is known worldwide as an experienced stalker and big game hunter, and a sometimes controversial but always sporting writer. He has an extensive hunting pedigree, and taken most of the European species still open to the sportsman, and a respectful number of dangerous game from both the African and American continents with various rifles. He is also an award-winning editor of sporting publications, holding editor-in-chief roles on Sporting Rifle and Modern Gamekeeping magazines and a dual presenter-director role on The Shooting Show. He describes himself as a true hunter conservationist.