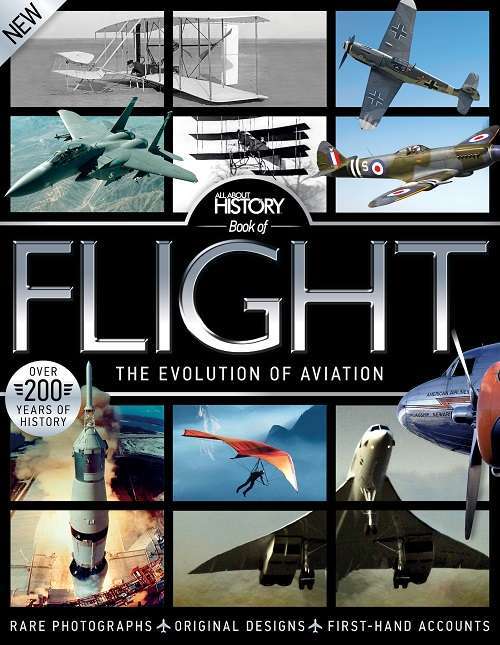 All About History Book of Flight

The story of flight is a global one. From Kitty Hawk, North Carolina, the site of the first flights by the Wright brothers, through to modern day Afghanistan and Iraq where aircraft have been at the forefront of conflict, the All About History Book of Flight takes us across every continent, into the skies above deserts, oceans and beyond, in times of peace and war. As much about people as it is about technology, this is a story of passengers and pilots, entrepreneurs and adventurers, involving both high drama and terrible human tragedy.
In this bookazine...
The evolution of aviation
The origins of flight
- Discover how hot air balloons began the flight phenomenon and how the Wright brothers changed history forever
The birth of aerial warfare
- The First World War beckoned in a new era of airborne conflict that would change warfare forever
War in Europe and the Pacific
- Aerial warfare reached its most desperate and deadly point during the Second World War, and proved decisive in both major theatres
The future of aviation
- Witness the technological innovations that have taken aeronautical science to ever greater heights
Also inside...
- Taking flight
- The Wright brothers
- Louis Bleriot: first English Channel flight
- The Belle Epoque
- The aeroplane goes to war
- Air fighting
- Bombers and bombing
- Industry aircraft and air forces
- The first transatlantic flights
- Aviation in the 1920s and 1930s
- New York to Paris non-stop
- Airships and flying boats
- The first modern airliners
- The approach and outbreak of the Second World War
- The Battle of Britain and the Blitz
- The bomber war
- Working with the armies
- The air war at sea
- Industry and new technologies
- Air travel in the post-war world
- Cold War confrontation
- Air power in Korea and Vietnam
- The Space Race
- The jet age
- Modern air power
- Aviation for all?
- Aviation and the modern world
Want to see what else we're offering?