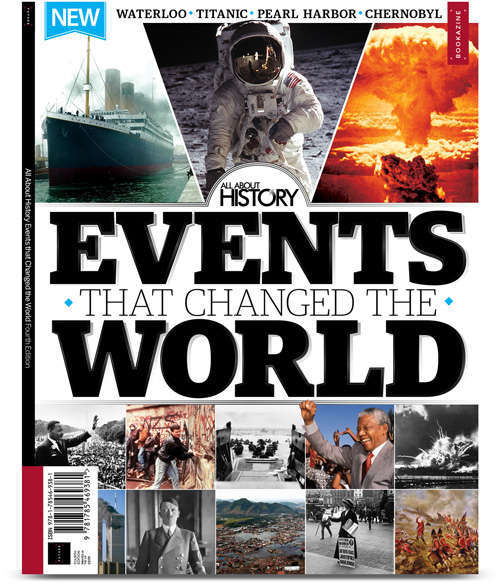 Book of Events That Changed the World (4th Edition)

Published 18th January 2018UK cover price is £9.99, overall price above includes shipping costs.
The Battle of Waterloo, Martin Luther King Jr’s famous speech, 9/11 – there are some events in history’s infinite stream of moments that stand out as turning points. These landmarks changed the course of politics, civil rights, countries and continents. In short, they are the events that shaped our world. Together, they form a turbulent story that is harrowing, sobering and inspiring in equal measure.
50 events that changed the world
- The key moments in history that shaped the world we live in today
Conflicts that shook the world
- Discover how the fate of the world was forged on the battlefield, from the Battle of Waterloo to the carnage of Operation Barbarossa
Disasters that defined a generation
- Examine the causes and effects of events such as the Chernobyl meltdown, the World Wars and more
Iconic events and inspirational moments
- Learn how man walked on the Moon, and the dream of one man to unite a nation
Also inside...
- Black death
- Christopher Columbus
- Washington
- Waterloo: The fall of Napoleon
- Lincoln’s Civil War
- Sinking of the Titanic
- What caused the Great War?
- Lenin’s bloody revolution
- Battle for women’s rights
- Hitler vs Stalin
- Remember Pearl Harbor
- The first atomic bomb
- Cuban Missile Crisis
- “I have a dream”
- Mao’s Cultural Revolution
- Apollo 11 lunar landing
- Chernobyl
- Fall of the Berlin Wall
- Indian Ocean tsunami
Want to see what else we're offering?