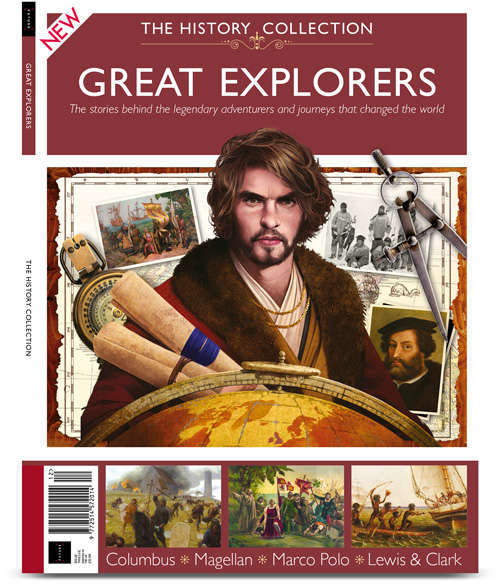 Published 10th May UK cover price is £9.99, overall price above includes shipping costs.Delve into the legends of history’s greatest adventurers. Trace the origins of the Age of Discovery, a time when European sailors embarked on dangerous voyages to the New World. Explore the modern journeys that took exploration to a new level, including Neil Armstrong’s monumental “one small step”.The stories behind the legendary adventurers and journeys that changed the world10 Incredible Expeditions- The most boundary-pushing quests for scientific knowledge and tradeAncient Navigators- Trace the expeditions undertaken and trade routes discovered by Medieval pioneersAge of Discovery- Delve into the amazing voyages that opened up the world to European dominationFinal Frontiers- The gruelling modern journeys that took exploration to a whole new level- Also inside... - Lost Kingdoms of the Vikings- Marco Polo- A Silk Road Trader- Ibn Battuta- The Chinese Treasure Fleet- Henry the Navigator- Christopher Columbus- A Sailor for Columbus- Vasco da Gama- Vasco Nunez de Balboa- Juan Ponce de Leon- Hernan Cortes- Warriors of the Age of Discovery- Ferdinand Magellan- Elizabeth I’s Tudor Pirates- A Tudor Voyage- Vitus Bering- How the World Discovered Australia- Voyages to New Zealand- Captain James Cook- Discovering the American West- The Voyage of the Beagle- The Franklin Expedition tragedy- David Livingstone- John Hanning Speke- Race to the Antarctic- Conquering Everest- Yuri Gagarin- Neil ArmstrongPage Count: 164