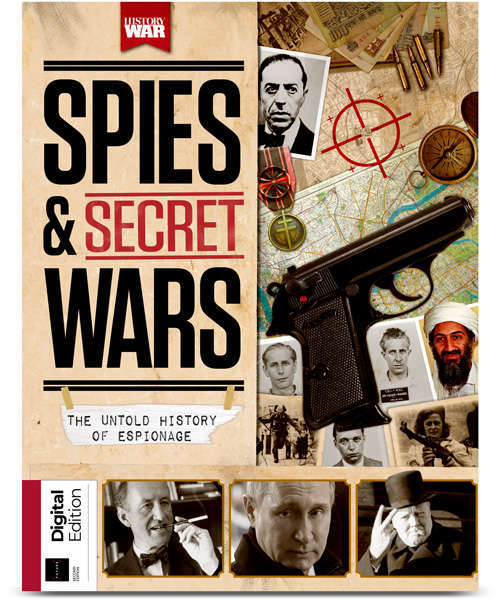 Published 31st May 2018UK cover price is £9.99, overall price above includes shipping costs. For every war waged in public view, there are those fought just as tirelessly under the cover of shadows. Featuring covert spy missions, proxy wars in far-flung places, and secret skirmishes fought in plain sight, The History of War Book of Spies & Secret Wars reveals the clandestine campaigns that the authorities would rather remained classified.The origins of espionage- From ancient times to modern day, find out how spying has evolved over time, including the origins of the CIA, MI6, SAS and KGB Hidden history exposed- Discover the off-the-books battles you’re not supposed to know about, from British forces supporting oppression in Oman to the CIA propping up South American dictatorsSuper spies unmasked- Meet the real-life 007s that have achieved infamy through incredible acts of daring-do, backstabbing betrayal, and salacious scandalReal-life spy gadgets- Featuring concealed weapons, secret codes and disguised listening devices, discover the gear secret agents really useAlso inside... - CIA: Working in the shadows- KGB: The sword and shield revisited- MI6: For Queen and country- Spies of the world- 10 secret missions of World War Two- How the Enigma code was cracked- The birth of the SAS- Dark secrets of the French Resistance- Operation Condor: The CIA in South America- Operation Anthropod: Killing Hitler’s hangman- Berlin Special Forces- Cold War under the waves- Operation Wrath of God: Israel’s revenge- Operation Argo: This movie will set you free- The hunt for Osama Bin Laden- Mata Hari- Sidney Reilly- Sir Francis Walsingham- Harold ‘Kim’ Philby- Julius and Ethel Rosenberg- Richard Sorge- Fritz Duquesne- 10 Celebrity Spies- Spy gadgets through timePage Count: 164