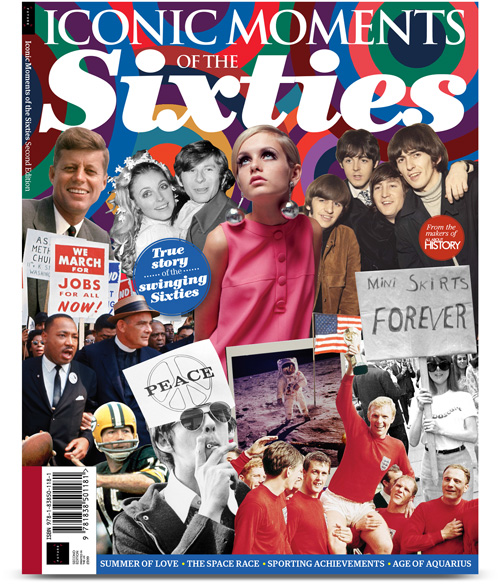 Published 4th April 2019UK cover price is £9.99, overall price above includes shipping costs.
The Sixties was a decade unlike any other. Some look back nostalgically at the counterculture and revolution in social norms about dress, drugs, sexuality and formalities, while others only see irresponsible excess and the decay of social order. We can only imagine how different the world would be today if the Berlin Wall had never been built, the first human heart transplant was never undertaken, or the contraceptive pill never made available to the public.
Throughout Iconic Moments of the Sixties you’ll see some of the most important political and social events in history brought to life through evocative imagery and expertly written features. Discover the pop culture sensations that gave the Sixties a swinging soundtrack and drove the crowds wild, from The Beatles to the The Beach Boys. From the elections of John F Kennedy and the Cuban Missile Crisis, to the progression of the Civil Rights movement under Martin Luther King Jr. and the climax of the Space Race, we’ve collected a wealth of important entries that span both continents and cultures.
Page Count: 164
Want to see what else we're offering?