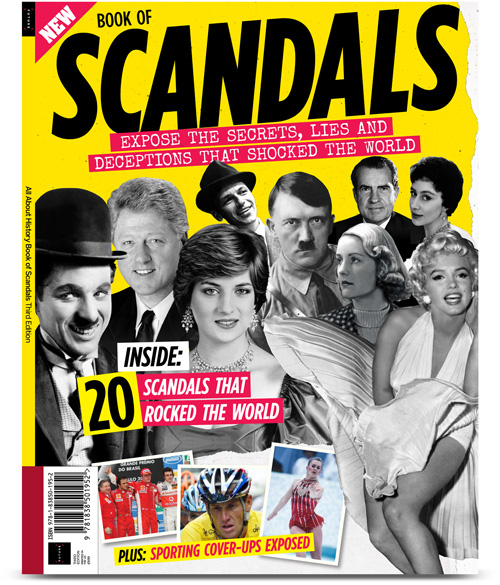 Published 23rd May 2019UK cover price is £9.99, overall price above includes shipping costs.
From the love that rocked a nation, to the sport stars that shamed them, the Book of Scandals covers the hottest affairs, cover-ups and cheats in all their titillating glory. Uncover the lies of presidents, and the shocking deaths that revealed secrets that ruined careers and ended marriages.
20 scandals that rocked the world
- From the death of a princess to the TV personalities that cause controversy
Political scandals
- The politicians that caused their own downfalls
Celebrity scandals
- The scandalous lives of the rich and famous
Sporting scandals
- Explore the cover-ups that ended careers
Royal & religious scandals
- The loves and lies that rocked whole nations
Also inside...
- Marilyn Monroe
- Charlie Chaplin
- Lewinsky Scandal
- Frank Sinatra
- Chappaquiddick incident
- Watergate
- J Edgar Hoover
- Alexander Hamilton
- Profumo Affair
- Hitler’s fangirl
- Teapot dome
- Rasputin
- Anastasia
- Edward VIII & Wallis Simpson
- Ludwig I
- Mayerling Incident
- Catholic Church
- Lance Armstrong
- F1 Spygate
- Black Sox Scandal
- Tonya Harding
- Stella Welsh
- Spanish ‘paralympians’
Page Count: 164
Want to see what else we're offering?