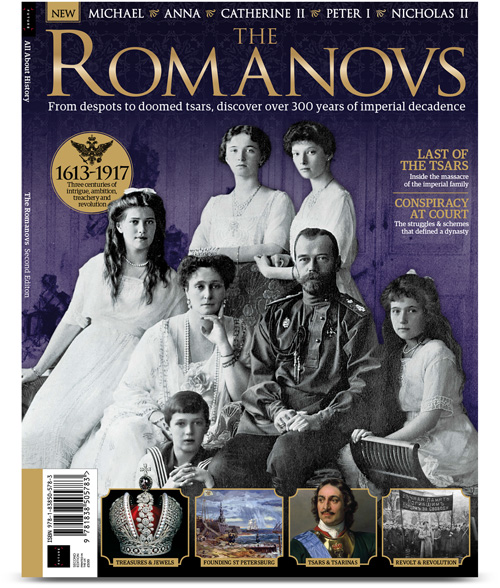 Book of the Romanovs (2nd Edition)

Published 21st November 2019UK cover price is £9.99, overall price above includes shipping costs.
On 12 February 1984, Grand Duchess Anastasia of the overthrown Romanov family died – or so many believed. In fact, this elderly lady was an imposter; a Polish peasant girl who’d duped the world for over five decades. When the lie was revealed, this great conspiracy once again captivated the world.
But the imperial family were no stranger to mystery and intrigue – over the course of three centuries, the Romanovs courted scandal, from the trysts of Catherine the Great to the disappearance of Ivan VI.
In this brand-new book, we reveal the scandalous rise of this royal dynasty, from the surprise ascent of Tsar Michael I and the enlightened reign of Peter the Great, to the tragic abdication and murder of Tsar Nicholas II in the midst of World War I.
Page Count: 148
Want to see what else we're offering?