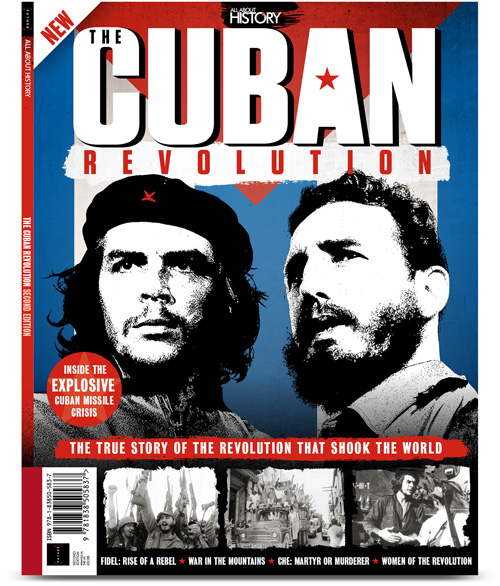 Published 21st November 2019UK cover price is £12.99, overall price above includes shipping costs.
Revolt and rebellion run in Cuba’s blood thanks to the Caribbean island’s history of conflict, foreign rule and political upheaval. In July 1953, a young, Marxist revolutionary by the name of Fidel Castro launched an audacious bid to throw off the shackles of corrupt dictator Fulgencio Batista. It would end in Castro’s arrest and subsequently his self-imposed exile in Mexico – but he would return. Three years later Castro set sail for Cuba with Che Guevara and 80 other rebels. With the support of the general population and using guerrilla tactics in the island’s mountains, they gradually gained the upper hand over Batista and his army. Batista fled the country on 1 January 1959, with Castro entering the capital Havana a week later to a hero’s welcome.
He would rule the nation, first as prime minister then as president, for almost half a century. Inside we explore the fascinating story of the revolution that shook the world, from its origins and early days to key events and iconic personalities from the conflict. We’ll also look at how the revolution shaped Cuba in the decades that followed, from the Cold War to the collapse of communism and into the 21st century.
Page Count: 132