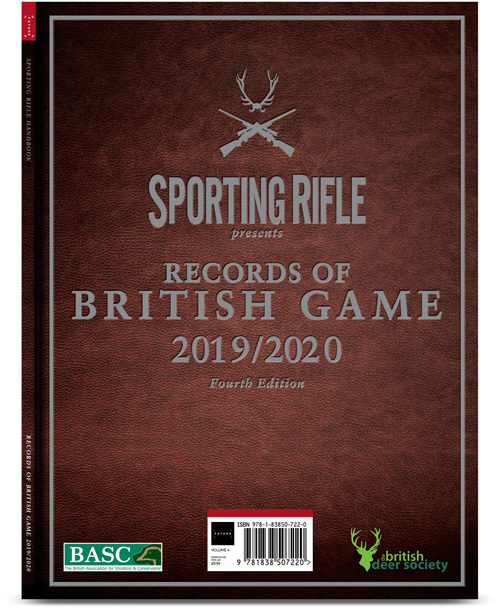 Published 27th December 2019
UK cover price is £9.99, overall price above includes shipping costs.
The Records of British Game is the definitive guide to all the heads measured and awarded medal or yearbook status by the BASC, BDS and Sporting Rifle measuring service since 2011. If you’ve had your deer, goat or boar head scored at a game fair or privately, odds are it will be listed in this book.
It works by categorising every head from the UK’s six resident deer species, plus wild boar and feral goat, not just by overall score achieved but by county too. This provides an additional insight on the local variations in the nation’s deer herd, casting light on which areas really are the most successful for each species. Species introductions, covering origins, identification and hunting tactics, provide added value to the reader.
This new edition adds more than 400 heads measured in 2019 and provides a comprehensive update on what the year’s outlook was like for hoofed game in the UK. Once again, it highlights the success of a system built ‘by stalkers for stalkers’ and one that clearly enjoys the trust of the British stalking public.
In his introduction to the book, BASC‘s James Sutcliffe said: “Keeping these records of antler measurements is a valuable tool in the world of deer management. It gives us an instant picture of where quality heads are produced. It also indicates that through management, areas that were not previously known for quality heads are beginning to produce more and more good examples.
“Aside from a gauge of effective and ethical stalking, I like to think of the antlers, horns or tusks that we keep as memories, each set bringing fond recollections of a particular stalk. Regardless of whether or not it makes a medal, each head means something very individual to the stalker it belongs to. What we have here, then, is a collection of some very fine memories of stalkers from across the country and all leases of life that we are privileged enough to share in.
“I would like to take this chance to say a huge thank you to the measuring team whose sterling efforts throughout the year have resulted in well over 400 heads measured this year, and, judging by some of the smiles I have seen on stalkers’ faces when they find out how their head measured, a lot of brightened-up days.
“Another massive thanks must go to all the stalkers who continue to bring their heads for measurement. We run the measuring service for you all and it certainly wouldn’t be possible without your continued support.”
Page count: 172
Want to see what else we're offering?