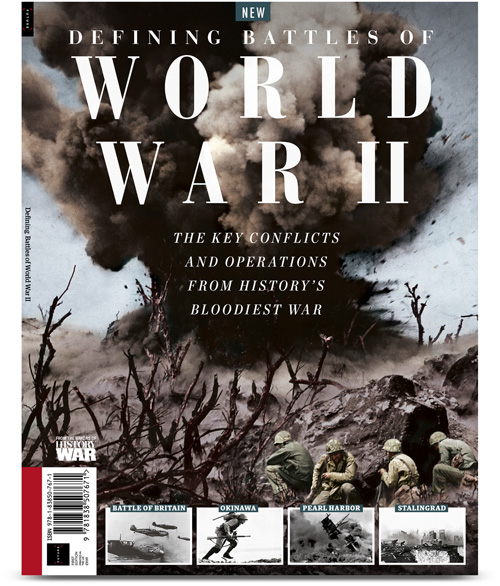 Published 26th March 2020
UK cover price is £9.99, overall price above includes shipping costs.
On 1 September 1939, Hitler’s army marched into Poland. Two days later Britain and France declared war on Nazi Germany. Just over 20 years after the end of the Great War, in which 20 million people died, the world was back in the clutches of a global conflict that would become the deadliest in history. For over five years battles raged around the globe, from Europe and Asia to the Atlantic and Pacific. In Defining Battles of World War II we take an in-depth look at some of the most significant campaigns and key battles of the conflict, from early German manoeuvres in Western Europe and Hitler’s fateful decision to invade the Soviet Union, to the Japanese attacks on Pearl Harbor and Singapore. We discover how the US took control at Midway, the Soviets stood firm at Stalingrad and the British won the day at El Alamein, as well as the Allies’ final decisive victories as the war drew to a close. In addition to the fascinating features, we also bring you stunning battle maps, iconic imagery, and explore the key events and defining moments that led the world to war once again.
Page count: 148